What is the Relationship Between Awareness, Perception & Experience? John King 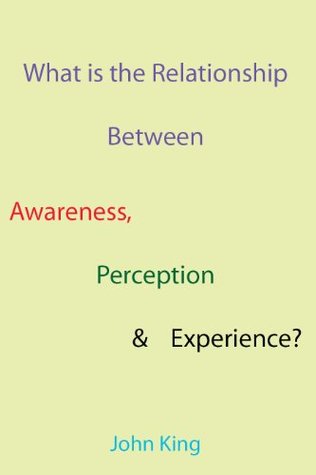 In this book John King considers both the nature of the three individual phenomena and the various possible links which could exist between the three phenomena. Some of the main themes covered are the idea that awareness and experience are equivalent, the existence of experience without awareness, the existence of perception without awareness, sleep and dreaming, panexperientialism, and higher-order monitoring.The phenomenon of awareness is a very important one.

Here is an excerpt: There are numerous possible relationships between the phenomena of awareness, experience and perception. In this book my aim is to consider these various possible relationships with the purpose of attempting to make some progress in understanding how these three phenomena are actually related. This attempt is not aided by the fact that I can only know about what I am aware of (and you can only know about what you aware of). By this I am simply stating an obvious fact about ones relationship with the world. So, one cannot know if there are states of feeling, or states of awareness, in that which is not one - for example, in a stone or in a bumble bee.

Similarly, one cannot know anything about the Eiffel Tower if one has never become aware of the existence of the Eiffel Tower (one has never visited it, seen pictures of it, heard anyone talk about it, etc). One is ignorant about the states of the world that one is not aware of. However, it would obviously be woefully inadequate to simply assert that what one is not aware of does not exist.

Comments
Comments for "What is the Relationship Between Awareness, Perception & Experience?":