The Nations Largest Landlord: The Bureau of Land Management in the American West James R. Skillen 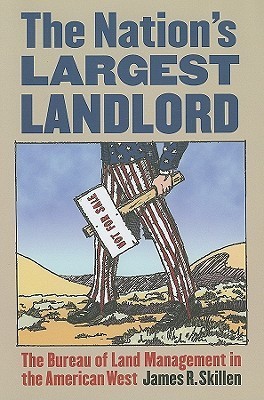 James Skillen traces the bureaus course over three periods-its formation in 1946 and early focus on livestock and mines, its 1970s role as mediator between commerce and conservation, and its experience of political gridlock since 1981 when it faced a powerful anti-environmental backlash. Focusing on events that have shaped the BLMs overall mission, organization, and culture, he takes up issues ranging from the National Environmental Policy Act to the Sagebrush Rebellion in order to paint a broad picture of the agencys changing role in the American West.

Focusing on the vast array of lands and resources that the BLM manages, he explores the complex and at times contradictory ways that Americans have valued nature.Skillen shows that, although there have been fleeting moments of consensus over the purpose of national forests and parks, there has never been any such consensus over the federal purpose of the public lands overseen by the BLM. Highlighting the perennial ambiguities shadowing the BLMs domain and mission, Skillen exposes the confusion sown by conflicting congressional statutes, conflicting political agendas, and the perennial absence of public support.

He also shows that, while there is room for improvement in federal land management, the criteria by which that improvement is measured change significantly over time.In the face of such ambiguity political, social, and economic Skillen argues that the agencys history of limited political power and uncertain mission has, ironically, better prepared it to cope with the more chaotic climate of federal land management in the twenty-first century. Indeed, operating in an increasingly crowded physical and political landscape, it seems clear that the BLMs mission will continue to be marked by ambiguity.

For historians, students, public administrators, or anyone who cares about American lands, Skillen offers a cautionary tale for those still searching for a final solution to federal land and resource conflicts.

Comments
Comments for "The Nations Largest Landlord: The Bureau of Land Management in the American West":